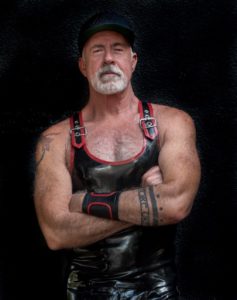 Ralph Bruneau is IML 39 (International Mister Leather 2017). He competed at IML as Mr. GNI Leather 2016 representing Gay Naturists International, the largest naturist organization in the world. Ralph is the first man representing a naturist title to have made the IML top 20 and the oldest IML winner in history. He began his leather journey in 1974 at the legendary Mineshaft in NYC. In his first career, Ralph was an actor on Broadway and on television creating the role of Mike Doonesbury in the Broadway musical Doonesbury and appearing on TV in shows from soaps to Seinfeld. In the 80’s at the height of the AIDS crisis be became a volunteer for the Shanti Foundation as a hospice worker and emotional support volunteer. He then went on to get a Masters and Doctorate in Clinical Psychology. Dr. Bruneau has a sex-positive, kink-positive practice in Los Angeles and has been nationally recognized for his contributions to the field of Marriage and Family Therapy in California. He has taught and lectured about intimacy and sexual expression for over two decades. He is actively involved in the campaign to end Conversion Therapy working with NCLR and the #BornPerfect campaign. He is on the founding Board of the Los Angeles Gender Center and a co-team leader for Team Friendly SoCal. As IML, he traveled over 118,000 miles as an ambassador to the leather community around the world. He participated in 43 weekends of events out of 52 in his title year. Nationally and Internationally, he judged over 20 contests during his title year as well as hosting events, auctions, panel presentations and keynotes. He judged IML 2018, IMsL 2018, MAL 2018, as well as contests from San Francisco to Chicago, to Atlanta, to Antwerp, and Nice. He was honored by the Tom of Finland Foundation twice, awarded Leatherman of the Year by the Payasos, and received the George Wong Person of the Year (2017) award from the Southland Honors. Dr. Bruneau recently been selected to serve on the Board of Directors of CLAW and is President of Avatar Los Angeles. The son of an artist, he was taught to value art and those who make it. He’s honored to be selected for this jury.